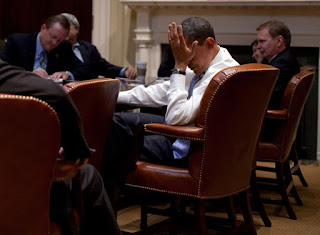 President Obama took on the entire GOP presidential field Monday — mocking their collective pledge to block attempts to raise taxes on the rich and hitting  Mitt Romney with an unusual direct attack.
He has often contrasted himself with Republicans on the Hill, but on Monday he aimed directly at the GOP presidential field as he sizes up the competition — and seeks to define an opposition that has already labeled him as a free-spending liberal.
“[There are] two contrasting visions that are going to be presented in the next year-and-a-half,” Obama told about 500 supporters in rural Iowa against the backdrop of a red barn. “I’m on a side that says we live within our means … and invest in jobs. The other side says we are going to make sure those who have benefited the most will pay the least. That’s their vision, [to] dismantle Medicare and turn it into a voucher system.”

Earlier, at a similar town hall event in the small town of Cannon Falls, Minn., Obama joked that he was prepared to own the moniker “Obamacare,” the GOP’s derisive description of his massive health care reform effort.
“I have no problem with folks saying ‘Obama cares,’” he said, standing in white shirtsleeves in a rural Minnesota waterfront park evocative of a Norman Rockwell painting. “I do.”
The Cannon Falls event — followed by drop-by visits to a local deli, a pie-making coffee shop and an elementary school — was a tonic to a president who has found himself trapped in Washington fighting intensely partisan battles, capped by the demoralizing and politically toxic debt ceiling debate.
And Obama seemed to be genuinely buoyed by his surroundings, despite cruising idyllic Midwestern back roads in a forbidding armored black bus that looks like a hybrid of the Death Star and the luxury motor coaches used by country music stars.
Emerging from the bus for his first event, Obama lit into Romney, accusing the former Massachusetts governor of ditching his commitment to health care reform to run in the conservative GOP primary: “You got a governor who is running for president. … It’s like [he’s] got amnesia.”
He even mimicked Romney: “Oh, this is terrible! This is going to take away freedoms!”
The audience was largely supportive, but there were murmurs of concern about the jobs crisis and the president’s willingness to accept some changes to entitlements such as Medicare and Medicaid.
“I think he’s doing about as good as you could, given this Congress, but I’m very worried about what he might give up on Medicare,” said Karen Sames, 53, an occupational therapy professor at St. Catherine University from nearby Egan. “Schools are having to cut back on a lot of services, including occupational therapy, already, and I’m worried about what else will be on the chopping block. … [And] I’d like to see him get out of Iraq and Afghanistan faster.”
Rep. Keith Ellison, a liberal Minneapolis lawmaker who has criticized the president for focusing too much on deficit reduction, added, “I’m glad the president was in Minnesota, glad he’s finally going to talk about jobs” and advised Obama to “cut through the noise and talk about nothing but jobs” while in the state.
Give it up, you know it and so does the rest of the country. You got nothing you chicken shit little
weasel, all you are doing is flailing like a little girl not getting her way at someone else's birthday
party.  Fuckwad........
Posted at Politico
Posted by Boilerdoc at Tuesday, August 16, 2011