Obama's bad advice to a farmer 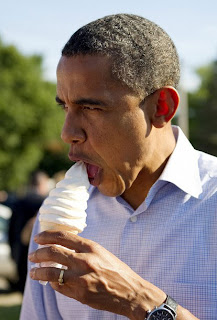 After a farmer expressed his concerns about rules and regulations that he heard could hurt his industry to President Barack Obama at a town hall in Atkinson, Ill., on Wednesday, Politico tested Obama's advice that the man "contact USDA." That didn't lead to very helpful answers.
The response — eventually — from a USDA representative was that “the question that was posed did not fall within USDA jurisdiction,” but rather the Environmental Protection Agency.

Turns out, Obama administration officials have been trying to fight rumors about various nonexistent regulations in farm states all year. Among them, a “cow tax” on farmers for the greenhouse gases emitted by livestock and limits for ammonia and ammonium under clean air rules.
Earlier this year, EPA struck down a rumor that it would regulate spilled milk the way it regulates spilled oil. To end this misinformation, the agency formally exempted milk containers from rules aimed at preventing oil spills from reaching water supplies. And the EPA’s clean air rules for nitrogen oxides and sulfur oxides released in July didn’t include limits for ammonia or other reduced forms of nitrogen.
EPA chief Lisa Jackson, who has been traveling to farm country in an attempt to improve her agency’s image, has repeatedly insisted  that the EPA has no plans to regulate farm dust, and she says that the cow tax rumor was a myth started by a lobbyist.
At a House hearing in March, Jackson expressed frustration at the “myths” surrounding her agency’s policies. “These mischaracterizations are more than simply a distraction,” she said. “They could prevent real dialogue to address our greatest problems.”
Since we were told that the issue was essentially that Obama had his agencies mixed up, and that our attempts find answers to the farmer’s questions at USDA was an unfair representation of their work, we gave the EPA a quick call.
Trying to retrieve the same information from EPA proved to be a slightly less arduous exercise than calling USDA.
Thursday, 3:37 p.m.: I call the EPA’s main number, where the operator connects me to someone else. When I explain that I would like to find out information about regulations concerning noise, dust and water runoff regulations and their possible effects on Illinois farmers, I am told that Illinois falls under “Region 5” and given their number.
3:41 p.m.: At the regional office, I am transferred to somebody that deals with “clean air.”
“Have you gone through our website by any chance?” the person asks. “Our online information is very useful. Just in general practice, it’s good.”
I said I was hoping to get some information over the phone and am given contact numbers for two people: one that handles “compliance enforcement” and someone else that works with “water compliance.”
I call both numbers and leave a message.

3:50 p.m.: Then I call back the regional office, explaining that both people were not at their desks.
“Normally Friday is not a good time — a lot of people don’t work on Friday,” the same person from earlier says. I mention that today is Thursday, to which they respond: “A lot of people take Friday off, but some people take Wednesday or Thursday off, too. And I know it’s the end of the summer, but people grab the opportunity to take a vacation before school [starts].”

The person gives me two more people’s contact information: one who is an “environmental engineer” there, and another one who is at the “air and radiation division.”
Both of them are also not at their desks, and I leave messages.
4:46 p.m.: I hear back from the “environmental engineer,” who tells me I should speak to the person at the air and radiation division, with whom I left a message earlier.
5:27 p.m.: The person from the air division calls back, who explains he wouldn’t be the best person to talk to about water and noise regulations, and because noise regulations are not federally enforceable, the Illinois EPA would be the place to call.
As for dust regulations, he says he would just need to know what kind of dust the farmer was talking about. “Without knowing what kind of source he’s talking about, it’d be pretty hard to generalize what requirements there are,” he says, adding that he would be happy to speak to the farmer from the town hall.
5:38 p.m.: At the end of the day, I ask EPA spokesman Brendan Gilfillan for a comment on our experience with calling the EPA to follow up on USDA’s response to Thursday’s story. This was his response via email:
“Below is an update on farm dust — while we do have statutory authority on noise pollution, I'm not aware of any pending rules or standards on that.
“Farm dust: This is a myth the Administrator has debunked personally on several occasions. While EPA is mandated by the CAA to review air quality standards for pollutants like farm dust every five years, and that review is currently ongoing, we have no plans to put stricter standards in place. That review, at Administrator's direction, has involved extensive outreach to farmers and ranchers.”