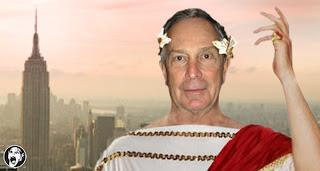 And New Yorkers wonder why the rest of the country no longer watches their shows, buys their books, reads their papers and magazines, or in general gives a crap WHAT they have to say anymore.

As far as I can tell, the only reason New York exists nowadays is to make Californians feel better about themselves.

They used to say, "Too dumb for New York, too ugly for L.A."  Apparently New Yorkers are aiming for both now, perhaps in hopes of being admitted to Massachusetts.

The tragedy in this for New York, besides the insult to the beliefs of so many of the 9/11 victims and their families, is this:  Bloomberg is all they've got.  Seriously.  Look at the New York political scene and tell me who they have who can make a credible run for mayor.

It's the same problem the Democrats have with Obama; they've drained the well of viable candidates to the lees and the straw's full of mud; who do they have to credibly primary him — or follow him?

Posted over at Three Beers Later
Posted by Boilerdoc at Monday, August 29, 2011