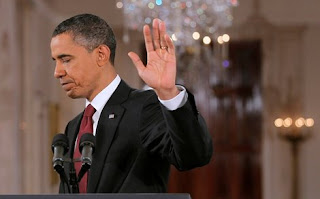 BARACK Obama's long-lost "Uncle Omar" has been arrested for alleged drink-driving outside Boston and detained as an illegal immigrant, The Times can reveal.
The arrest ends a mystery over the fate of a relative that the US President wrote in his memoir had moved to America from Kenya in the 1960s, although the circumstances of his discovery may now prove to be an embarrassment for the White House.
Official records say Onyango Obama, 67, was picked up outside the Chicken Bone Saloon in Framingham, Massachusetts, at 7.10pm on August 24. Police say he nearly crashed his Mitsubishi 4x4 into a patrol car, and then insisted that the officer should have given way to him. A report filed with the Framingham District Court said that a breathalyser at the police station registered his blood alcohol at 0.14mg/100ml of blood, above the state limit of 0.08mg.
According to a local newspaper, Mr Obama was charged with driving under the influence and driving to endanger, as well as failing to use a turn signal. He was detained as an illegal immigrant because the US Bureau of Immigration and Customs Enforcement has an outstanding warrant for him because he was previously ordered to be deported to Kenya.
According to local reports, Officer Val Krishtal and another driver had to slam on their brakes to avoid hitting Mr Obama's car, which rolled through a stop sign and took a quick left turn. Mr Obaeep underma allegedly told the officer he had right of way and said he doubted the officer was forced to brake hard as he did not hear his brakes squeal.
Mr Obama pleaded not guilty at his remand hearing, but was held in custody because of the immigration warrant.

Posted at the Australian

A number of media outlets  have already reported that an illegal immigrant from Kenya by the name of Onyango Obama, 67, was arrested  last week on Wednesday after he nearly rammed his SUV into a police car in Framingham, Massachusetts.
He was later charged with DUI among other violations. I spoke to Framingham Public Information Officer Lieutenant Delaney who told me that when Onyango Obama was asked at booking if he wanted to make a telephone call to arrange for bail, the Kenyan immigrant replied: "I think I will call the White House."

Posted at the Washington Times

File this one under: sweep under the rug or blame it on the Tea Party.
Posted by Boilerdoc at Monday, August 29, 2011