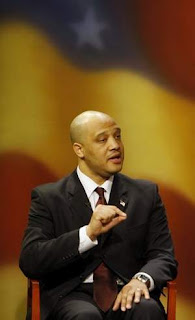 A top lawmaker in the Congressional black caucus says tea partiers on Capitol Hill would like to see African Americans hanging from trees and accuses the movement of wishing for a return to the Jim Crow era.
Rep. Andre Carson, a Democrat from Indiana who serves as the CBC’s chief vote counter, said at a CBC event in Miami that some in Congress would “love to see us as second-class citizens” and “some of them in Congress right now of this tea party movement would love to see you and me…hanging on a tree.”
Carson also said the tea party is stopping change in Congress, likening it to “the effort that we’re seeing of Jim Crow.”
Refer to page 12 in the Liberal playbook, when and argument is lost fall back
and accuse your opponent of racism

Posted over at Politico
Posted by Boilerdoc at Wednesday, August 31, 2011