Obama: 'heavy burden' getting up 'every morning' 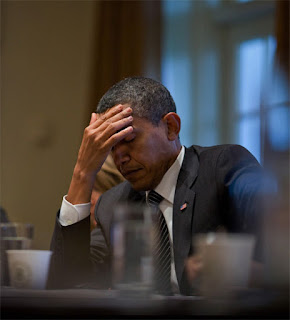 The Washington Examiner President Obama assembled his economic team looking for people to help with the "risk-averse business of actually governing," Ron Suskind writes in his new book, Confidence Men: Wall Street, Washington, and the Education of a President, but his choices apparently made for a combustible West Wing and drew fire from at least one Democrat legislator.
Sen. Byron Dorgan, D-ND, especially disliked then president-elect Obama's choice of Tim Geithner for Treasury Secretary and Larry Summers to chair the National Economic Council. "You've picked the wrong people," Suskind quotes Dorgan as telling Obama in December, 2008. "I don't understand how you could do this. You've picked the wrong people!"
Nonetheless, Obama had chosen - and in Summers' case, bargained - for these choices. Summers accepted the job on the condition, Suskind reports, that "he would manage all information regarding economic matters that passed to Obama, and he would be first among equals to replace Bernanke." And Obama cut the deal, apparently, even though Summers' critics "said he was too divisive, too combative . . . and that his track record over the years in major decisions had been disastrous," Suskind writes.

Summers apparently used that bargained-for power over information in the debate about the size of the stimulus package, when Suskind says he "chose not to include [a plan for a $1.2 trillion stimulus] in the materials for the president-elect" to review, even though that plan had been written by Christina Romer, Obama's chair of the Council of Economic Advisors. Suskind quotes Romer as saying that "Larry [Summers] fancies himself very good at politics, and he wanted to please Rahm [Emanuel, Obama' chief of staff]. That created problems in terms of how things were decided."

Indeed, conservatives might thank Summers for that editorial decision insofar as it helped prevent approximately $400 billion in government spending, but the spectacle of the NEC chair preventing the president from seeing advice submitted by the CEA chair is disconcerting.
Suskind provides an anecdote that indicates the value Summers placed on this control over information. When Summers learned that Peter Orszag had prepared a "specially-ordered, back channel report" for Obama about the fiscal crisis, he confronted Orszag for not sending him the report first. "What you've done is IMMORAL!" Suskind quotes Summers as shouting. Such behavior from Summers resulted in what Peter Rouse, a senior adviser to the president, described in a memo as "deep dissatisfaction" among Obama's economic team because of "what is perceived to be Larry's imperious and heavy-handed direction of the economic policy process."

Suskind writes that Rouse undertook a series of recommendations for "revamping the White House's administrative structure" and, by August 2010, Romer and Orszag had left the White House and "reports had surfaced that Summers would be leaving by year's end" (although not necessarily because of Rouse).
Suskind reports that Obama, on some level, was relieved at these departures because they provided him with "a clean slate" of staff who had not seen him under pressure:


As [President Obama] confided to one of his closest advisers, after a private display of uncertainty, 'I can't let people see that, I don't want the staff to see that.'
And: 'But I get up every morning. It's a heavy burden.'

As jobs go, the presidency is a very heavy burden. Heavy is the head, as they say.


Too fucking bad crybaby, there is a large percent of Americans who have the same
view when they wake up, the big difference is they cannot say "the hell with it I'm going
golfing". Suck it up asshat, you made the problem, you deal with it ( until your ass is
booted out ).
Posted by Boilerdoc at Tuesday, September 20, 2011