Mike Huckabee, the former presidential candidate and certified non-fan of Rick Perry, says the Texas governor isn't ready for the 2012 primetime.
Perry's latest debate performance showed he is "not prepared for the pressure of the presidential stage yet," Huckabee said on Fox News Saturday. "Rick Perry's got a struggle ahead of him."

Huckabee compared Perry to 2008 presidential candidate Fred Thompson, who entered the race late to huge anticipation and quickly ran out of steam. During that campaign, Huckabee sought Perry's endorsement, only to see his neighboring governor back Rudy Giuliani.
The former Arkansas governor said Perry fumbled the debate question about his support for giving in-state college tuition to the children of illegal immigrants. Perry's problem, Huckabee said, was that he positioned himself "really in opposition to the [GOP] base." 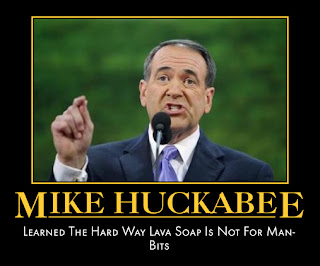 Posted by Boilerdoc at Saturday, September 24, 2011