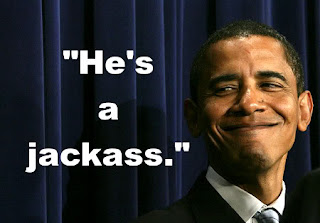 Politico When President Obama laid out his  deficit plan Monday, he wasn’t just trying to sell a policy. When he pressed for tax hikes on the rich and announced, “This is not class warfare,” he was trying to exorcise a demon that has bedeviled the Democratic Party for decades and in the process deprive the Republicans of one of their trustiest weapons.
The reaction from the right was swift and sure: “Class warfare!”
The idea that tax hikes on the wealthy represent a Marxist pitting of the classes against one another is a political trope that over the years has crippled a central element of the Democratic agenda - using a progressive tax system to pay for government programs intended to create a fairer society.
Obama has gambled that he can get out in front of this attack by confronting the idea more directly than Democrats have in the past. In an email to supporters Monday night, Obama campaign manager Jim Messina made it clear the president intended to take the issue head-on, describing the charges of “class warfare” by Republicans as “their rhetorical smokescreen for providing millionaires and billionaires special treatment.”
Show me a liberal and I will show you an idiot that needs a swift kick in the crotch
Did you get that Attack Watch????
Posted by Boilerdoc at Tuesday, September 20, 2011