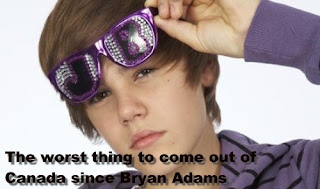 An astronomer is trying to get the popular artist into space on a private rocketship to “help jump-start the emerging suborbital spaceflight industry,” the Huffington Post  reports.Seth Shostak, a senior astronomer at the Search for Extraterrestrial Intelligence Institute in California, said that if a celebrity as big as Bieber were launched into space, the interest of space tourism would increase greatly among the American public.“My suggestion is, be sure to send Justin Bieber on one of these flights early on,” Shostak said on Tuesday during a presentation at the 2012 Next-Generation Suborbital Researchers Conference, “If there’s more interest, there are more customers. If there are more customers, there’s more technical development. It’s a positive feedback loop, and obviously that’s good.”Though Bieber’s worldwide popularity put him at the front of the rocket line, he’s not the only artist who might be shot into space.HuffPo also reported that singers Beyonce Knowles and husband Jay-Z have allegedly thought about filming a music video in space. Shostak said the two new parents and widely popular artists could also help get the suborbital industry off the ground and make space travel relevant again.
Posted by Boilerdoc at Friday, March 02, 2012