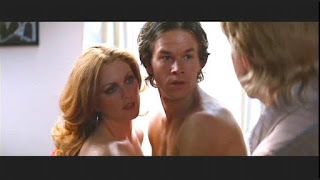 On the red carpet Thursday before the preview of the HBO film “Game Change,” actess Julianne Moore, who plays Sarah Palin in the film, said she did not want to talk about politics before declaring herself a "liberal Democrat" who supports President Barack Obama.
"Are there any public policy issues that you agree with Sarah Palin on?"
Moore said, “You know, I’m leaving politics out of this. And she’s [Palin] not a political figure right now, I mean, I think she’s a--right now--she’s a correspondent for Fox News, so.”
“What about President Obama, do you agree with some of his policy positions?”
Moore, laughing, said, “Yes. I’m a Liberal Democrat. So, yes.”
Moore also said it was “fascinating” to play the conservative Palin in the film and added that she tried to be as accurate as possible in her portrayal.
“Game Change,” which premieres on the cable channel HBO on March 10, chronicles the Sen. John McCain's selection of the former Alaska governor as his running mate on the 2008 Republican presidential ticket.
When asked what it was like to play Sarah Palin, Moore said, “It was fascinating. It really, really was. I mean, I think whenever you’re playing a living figure, let alone a historically and culturally significant one, you have a tremendous responsibility to be as accurate as possible, to be as true as possible.”
“So it was a daunting task,” Moore said.  “I had--fortunately, everything is documented. I have a lot of things to draw on. There’s YouTube, all the books.  And I really just tried to work within those parameters and be true within the characterization.”
Moore did not meet with Palin before portraying her for the film, though she said Director Jay Roach reached out to Palin for a meeting before filming. Palin, Moore said, declined the meeting. “So we knew she didn’t want to be involved,” said Moore.
The HBO film has been criticized by aides to Sarah Palin and Sen. McCain has described it as inaccurate. “It's based on a book that is full of unattributed quotes, things that absolutely never happened and, if it's based on that book, which I was briefed on, then, of course, it can't be accurate," McCain said on Monday.
The senator’s wife, Cindy McCain, told CNN, "I lived this. And from everything I've read and heard, it doesn't even resemble what took place. I can go to Disneyland for fiction.”

I just found out that I will have to miss the show, my sock drawer needs to be rearranged...
Posted by Boilerdoc at Friday, March 09, 2012