With the continuing possibility of North Korea escalating on the threat of a nuclear attack against US bases and possibly Hawaii or the westcoast of the US mainland, Joe Biden reassured Democrats during a recent California speech that he’ll personally take the fight to the enemy.’  “I’ll get myself on a B-52 and drop the damn thing myself if that fat little pinko chink bastard Kim tries anything funny.” 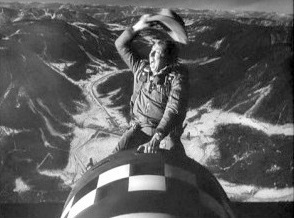 Again, Biden claims it’s all a show and the North Koreans go through this each spring when food and fuel supplies have dwindled over a long winter.

“These commie clowns are just looking to stir stuff up and are trying to get a few handouts from folks like us, ” said Biden as he tried to ease the tension among west coast supporters who find themselves in the eye of the storm for the first time since WW II.

Biden supporters cautioned California voters to hang tough and possibly dig a few really deep holes in their backyards just in case and mentioned that the Vice President probably won’t be visiting again for awhile.

In Washington, the President’s inner-circle have prepared a proposal that would give the North Korean regime EBT cards, or as they’re more commonly know as..Food Stamps, to ease the annual shortages of food and other household staples. According to Valarie Jarrett, the President’s most trusted advisor, “Look those people over there are real skinny and not much over 5’6″…So really, how much can they possibly eat anyway? Besides, we have half the world’s fat people on EBT and WIC cards now so, what’s a few more skinny ones?”

The Vice President’s staff say Biden is being realistic about fighting for our country and in fact, has taken the afternoon off to participate in a one-on-one Kung Foo class just in case the B-52 gets shot down or crashes